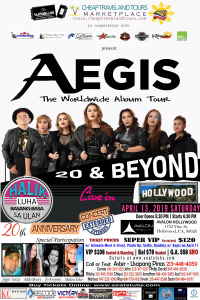 Fans will be given a chance to meet and greet with their idols. The seats are limited so you have to hurry and buy your S-VIP tickets ASAP. This intimate moment with the Aegis is a giveaway to fans, a way of saying “Thank You” for the undying support for the past 20 years and more to come. The meet and greet will happen two days before the concert in a different venue which is at Josephine’s Bar & Restaurant in Cerritos. This is purely bonding with the Aegis. Selfie-Selfie with the members of the Aegis Band. You can talk with them or ask questions. No more Meet & Greet at the venue unless you live very far from Cerritos area or you have a valid reason. We encourage you to attend to this big night because this is a fun night for everyone. We will be giving away prizes and gift certificates from our sponsors.

We are celebrating The Aegis Band 20th Anniversary at the Hollywood Walk of Fame at the historic “Avalon Hollywood” landmark located between Vine St. & Hollywood Strip. It’s gonna be a more exciting and exhilarating get together of the Aegis Band fanatics who have been supporters for the past 20 years and counting. It’s not just a concert. It’s a Big “CELEBRATION” and an iconic event you don’t wanna miss.

Spread the love           The legendary singer Ely Buendia, the lead vocalist of the famous Eraserheads Band will be performing Live at...