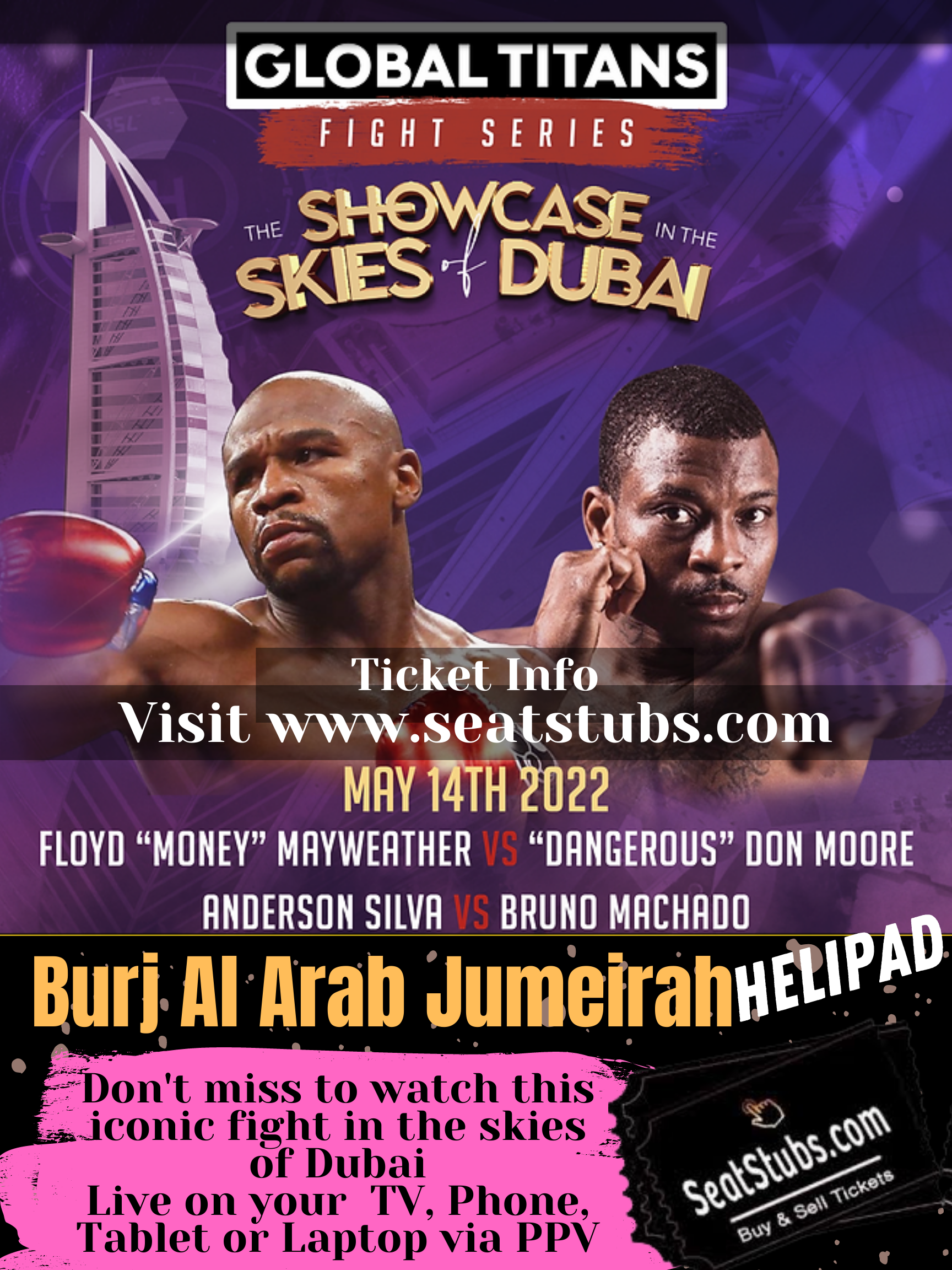 Floyd Mayweather Jr. To Fight In Dubai in 2022

The undefeated professional boxer Floyd Mayweather Jr. is back in the ring to fight with another undefeated professional boxer, the Dangerous Don Moore. This upcoming fight is brought to us by the Global Titans Dubai and is scheduled to air live on May 14, 2022. This fight is not just an ordinary fight but a match that will be seen happening in the high skies of Dubai, at the Burj Al Arab Jumeirah Helipad (Helicopter Pad). This is tagged as an Iconic-Epic Fight where the world’s greatest champions are united to create a new generation of fight entertainment. It’s a fight of one undefeated world champion against another undefeated world champion. This is gonna be an eight-round face-off where the two world champions will bring out their best for the world to enjoy. This for sure will be an intense, explosive, toe-to-toe, and punch-for-punch event.

Global Titans Dubai is the first in series of special boxing and MMA events which will be staged at iconic locations across four continents. Each main event is broadcast globally, featuring champion fighters and exclusive collectable NFT tickets. “Pretty Boy”. The boxing industry used to tag him as the Pretty Boy in boxing back in his amateur years after sustaining an unmarked face after every fight in 1993, 1994, and 1996. Although he was undefeated 50-0 during his retirement in 2017 as a professional boxer, his amateur career left him with at least nine losses according to some sources. Upon entering his professional boxing career, he repackaged himself into a brand new name: Floyd “Money” Mayweather.

The nickname ‘Money’ came from when I was joking and throwing money into the camera, so it stuck with me,” he said

After becoming a pro and started making his way into the ladder of success, achieving titles after titles and amassing belts after belts, he stayed undefeated in 38 professional bouts (24 by knockout). He was the best pound-for-pound fighter in the world but it was only during the “Mayweather vs. De La Hoya fight that he gained a momentous shift when he was finally recognized by the mainstream media after defeating Oscar De La Hoya for the WBC super welterweight (junior middleweight) title in May 2007. Aside from this win, the four-part documentary broadcasted on HBO cable TV helped boost Mayweather’s name to be known in the mainstream media. This fight made him the “Floyd Mayweather Jr.” as we know him today. It also marked a staggering financial success, money pouring into his wallet from pay-per-view and live audience ticket sales.

On December of the same year, Mayweather was back in the boxing ring for another historic win vs. Ricky Hatton in Las Vegas. This victory brought him to the Ring magazine’s Fighter of the Year award.

Roger Mayweather is the brother of Floyd Mayweather’s father. He was an American professional boxer and trainer who competed from 1981 to 1999. He was a two-division world champion, having held the WBA and lineal super featherweight titles from 1983 to 1984, and the WBC light welterweight title from 1987 to 1989. There are two ways on how to watch this most anticipated event. You can watch the fight in the comfort of your home or in any location you desire by using your cellphone or mobile phone, your tablet or your laptop. If you want to watch it on a bigger screen, you can watch it on your TV. This can be done by purchasing an “Access Pass” at LiveNow to watch via Pay-Per-View. This access pass includes the following benefits.

You can be a part of this iconic-epic fight for as low as $29.99 at LiveNow, one of the most trusted online ticket distribution outlets.