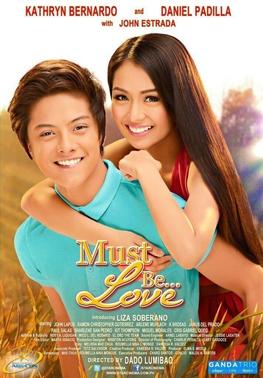 Must Be… Love is a Filipino movie spoken in Tagalog dialect that was filmed and released in the Philippine theaters in 2013. Filipino coming-of-age romantic comedy film directed by Dado Lumibao, starring Kathryn Bernardo and Daniel Padilla. The film was shot in many locations in Cebu and Laguna in the Philippines. The film was produced by Star Cinema and was released nationwide on March 13, 2013.[1]

This marks the first solo film with love tandem Kathryn Bernardo and Daniel Padilla in a leading role following their roles in the ensemble films 24/7 in Love and Sisterakas in 2012.[2]